How often we try to send a message but we end up sending the wrong one and not the intended unintentionally.
A group of young men were given the responsibility to clear up a refuse dump site and when they were done, they intended to send a message to habitats (human habitats of course) in the environ
-DUMP NO REFUSE HERE- but unfortunately they ended up with –DUMP NO REFUGE HERE- which I think was a result of the level of their literacy, close to zero percent level of formal education to be precise.
But is it just the below average educated folks that do send the wrong message unintentionally? The obvious answer is NO!

Fortunately, I happen to have added network administration to my resume, computer networks actually, and core network geeks would be familiar with the acronym MOTD (Message Of The Day). Don’t knock your head over if have no idea what that is, it’s just a message displayed at the front door of a network, no big deal.
A certain network admin happen to set his firm's network MOTD to – HELLO, WELCOME-. Unfortunately some group of hackers got interested in his network, hacked it and messed up the firms data in the process. Fortunately they were caught but believe me they got off on technicalities totally unscathed. The dudes claimed they were told WELCOME at the network’s door by the MOTD.

It’s no news that a lot of ladies do send the wrong message most times all for fashion and being trending. Harlots and whores were known to dress in seductive manner to ensnare their prey. But lately, a good number of ladies dress whore like with the aim to feel amongst what’s up and trending babes and invariably send the wrong impression to whore-mongers and the public at large of whom they really are. All cautions have been thrown to the wind. 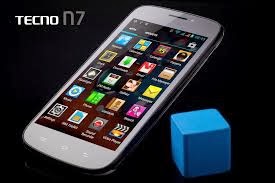 Many times inventors and entrepreneurs will unwittingly price products at a point where they are sending the wrong message.  Virtually everyone who has their own business, whether they are selling a product or offering a service, has fallen victim to the same problem at one point in time or another.  When you are starting out it is tempting to offer a low price in order to get started.  The trouble with this method, however, is that many people use price as a way to inform themselves about quality.    If your price is to low then many will assume that what you have to offer is not of a high enough quality and simply go elsewhere. I remember a time Tecno phones were regarded as china phones notwithstanding its American origin because they were damn cheap. Now I think we all know better.

One thing that baffles me is some religious centers that do not permit their ladies to wear trousers to church but permit them to wear it every other place else. I for one have no problem with a lady on trousers, on that issue I rather stay on the fence because I have not gotten enough fact yet as to the wrong or right in that regards. But my only issue is the same religious leaders preach that God is Omni-present (Present everywhere at all times). If this Omni-presence nature of God is true, why do some clerics not permit ladies in their congregation to wear trousers into the church and permit same to be worn outside the church by ladies of same congregation? Some claim that some ladies put on indecent trousers hence they disallow it but hell no, some ladies also put on indecent skirts too why are skirts not disallowed in the same spirit of indecency of usage by some. Really I don’t get the point, if it isn’t right it isn’t right that’s what I believe. 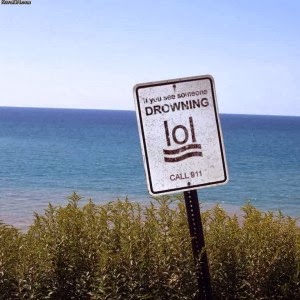 But sometimes we see what we want to see and get the message totally wrong not necessarily because the wrong message was sent. The picture to the left is an example. I guess a lot of people would see LOL, but you know what I see?
Two arms outstretched, head above water, and wavy lines representing flowing water…the picture actually indicates someone drowning and the instruction below is to call 911.
Finally to my gentle men who cleared the dump site, I off course won’t dump no REFUGE, though I might just drop some REFUSE.

US NSA and UK GCHQ 'can spy on smartphones'

February 22, 2014
The US National Security Agency (NSA) is reported have cracked the security codes which protect data on iPhones, Blackberries and Android devices.
German news weekly Der Spiegel says documents suggest the NSA and the British GCHQ made joint efforts to gather intelligence.
Teams looked at each phone to crack its privacy codes, Der Spiegel said.

Saturday saw thousands of demonstrators in Berlin demand that the NSA stop monitoring internet users.
Codes unlocked
The documents Spiegel has seen do not show whether or not there has been mass surveillance of phone use.

Once the intelligence teams had unlocked the codes, agencies could read a user's contacts and lists of who had been called.

The BBC's Steve Evans in Berlin says the reports do seem to indicate that the British and American security agencies have the ability to read private communications beyond what might have previously been thought possible - or desirable by those who fear the intrusion of the state.
The magazine d…
Post a Comment
Read more