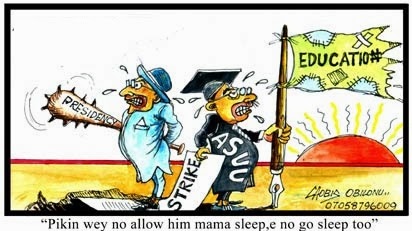 The union was active in struggles against the military regime during the 1980s. In 1988 the union organized a National Strike to obtain fair wages and university autonomy. As a result, the
ASUU was proscribed on 7 August 1988 and all its property seized. It was allowed to resume in
1990, but after another strike was again banned on 23 August 1992. However, an agreement was
reached on 3 September 1992 that met several of the union's demands including the right of workers to collective bargaining. The ASUU organized further strikes in 1994 and 1996, protesting against the dismissal of staff by the Sani Abacha military regime and bla bla bla…
But this piece is not about the history of ASUU, its rather about the effect of their incessant strike as the last resort almost every two years.

On students first and foremost, the effect is 360 degree negative. I know no one needs a prophet for conviction.
Like the popular saying goes, the idle mind is the devil’s workshop. Idleness is one deadly weapon we fail to realize that ruins mankind. The mind is always at work whether a person is physically busy or not. The busier a person is with positive things, the less likely the mind would generate evils ideas and that obviously goes the other way round too. Now let’s try to imagine the number young Nigerians that became idle for the last six months approximately due to the strike in varsities. I bet the result we would get would be in multiples of thousands that’s if it doesn’t run into millions. We can safely assume that more than seventy percent must have gotten into one shady deal or the other especially now that internet fraud thrives amongst the youth. I guess we can say that’s an ‘A’ grade for ‘EVIL 101’ if that was a course studied in school. If anybody had been very conscious to weigh crime rate for the last six months I guess we would have been importing gigantic scale machines now to get the accurate weight.

More also, it is worth noting that some ladies would not come back single at school resumption cause by now they would be looking forward to prospective single motherhood and the number would have tripled if not that majority by now would have done the needed (as Stella Oduah would say).

If you have been witness to one or two of these long strikes, you would agree with me that not everybody that left as your classmate returns. Due to the fact that everybody wants to live the good live (in quote actually), majority go in search for money by all means and at all cost. This quest for the good live by idle students leads to the birth of armed robbers, prostitutes, and should the strike coincide with any electoral process touts and thugs. Some of these talented Nigerians forced out of school end up in police cells and the unfortunate ones lose their lives and really nobody cares. 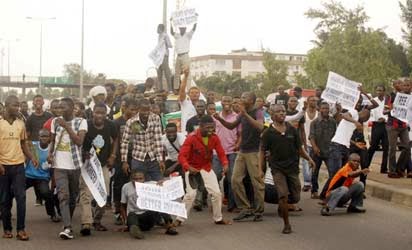 Nigerian varsities as we know do not provide accommodation for each and every student (except for some of the private ones) and hence majority of the students rent houses in varsities host communities. Need I mention what has happened to their rent for the last six months of absence? I guess you know the story as well as I do, their rent is expired and their very nice landlords and landladies respectively do not give a damn to their plight. They just have to pay up new rents or be evicted. It is worth noting that schools were in their second semesters and about taking exams before the strike, now those in finals who having calculated their expected year of graduation and paid their rent in that regard would have to go get money to pay for at least two more months and nobody cares about their pain. And here is a little punch line for those who were age 29 and probably their birth month happens to fall between January and March and were suppose to graduate at the end of 2013, you might not just be able to go for the one year compulsory service anymore because now we are 2014 and you will become 30 before your final result comes out at about march and by then you have successfully crossed the age for service (am so sorry about that but its the reality).

On the host communities of varsities, the strike also gave them a stung directly and indirectly. Especially for the traders in such environment, they saw hell for the last six months due to the fact that there were no customers to purchase their wares. Transporters were left stranded with very reduced passengers to attend to and need I say that some of these persons whose businesses were affected would have to survive and hence taken into one crime or the other in the absence of any other viable option.

Fortunately and unfortunately, not all Nigerians who have wards in varsities felt the pain of the six months strike. Not all students at varsity level were faced with the perils that comes with strikes, especially those whose parents are wealthy enough to send them abroad for studies…especially the wards of politicians and highly placed government personnel’s and political appointees, and hence the reluctance to deal with the strike by the government. It is amazing that ministers of education and commissioners of education both past and present rarely have their wards study in Nigerian varsities, and I wonder why. May be they know the state of Nigeria varsities and the quality of education dished in our shores but the big question is what difference have they made in the system through their respective offices. May be a bill should be passed into law as to the eligibility of such positions to people who have their wards in Nigerian varsities and  restricting the wards of ministers and commissioners of education to school in our shores and in public varsities especially… like I said, may be.

Looking at things critically, were the striking lecturers affected in any way? Seriously I don’t think so except for Professor Iyayi (from UNIBEN) may his soul rest in peace, who lost his life, I can rarely see the lecturers being affected.
First of, a good number of public varsities lecturers take up jobs in private schools. This is a very bad trend because they abandon the students in public varsities for most of the time and pay more attention to the private schools where they have taken up part time jobs. And sincerely speaking their job in the public varsities are treated like part time and the private school they are attached to becomes the full time one, this I experienced firsthand. And about their salary that was owed during the strike, all would be duly paid. So finally, they don’t get to lose anything after staying home for six months.

The victors and the vanquished are so obvious that I don’t have to spell them out.
Was the strike called for? To me, yes. Was the duration called for? No! Some people didn’t act fast because they were not affected in anyway.
But all said and done, request granted and money paid and everybody is happy.

These are questions only time can answer. Till then, let’s keep our fingers crossed…except for me, because I’m on to the next article and lest I forget, compliments of the season.